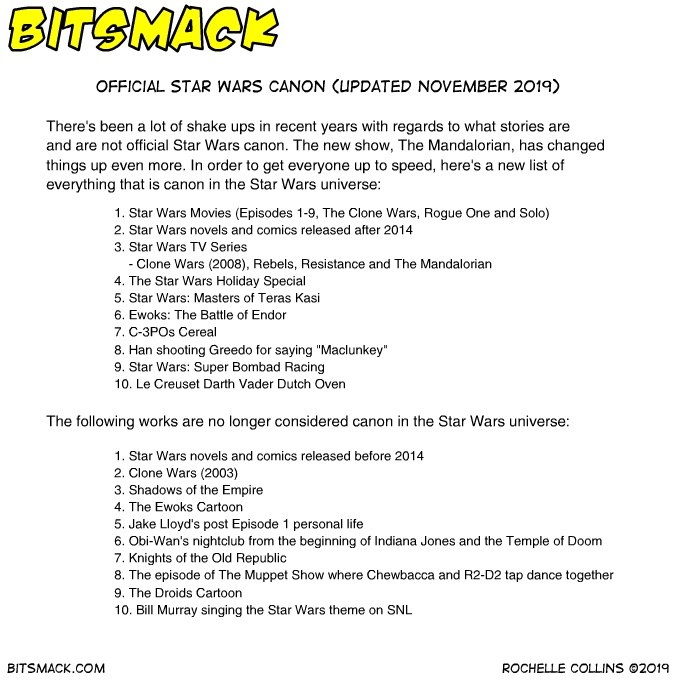 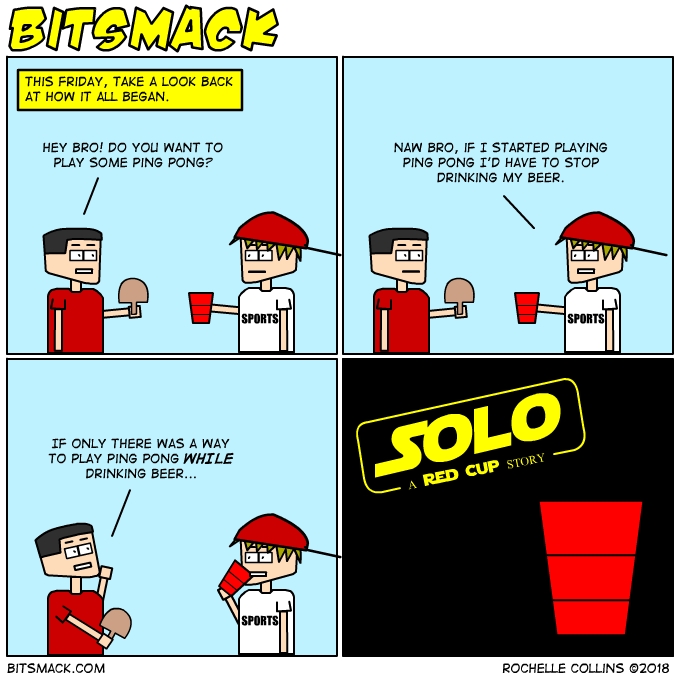 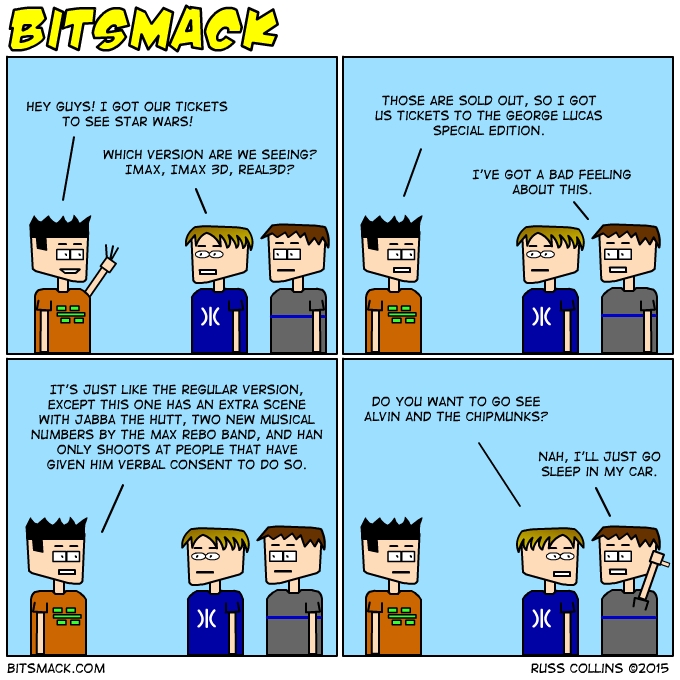 It has been awhile since I have put up a comic, so here you go: END_OF_DOCUMENT_TOKEN_TO_BE_REPLACED
Personally I think it has gotten a little <a href=https://www.bitsmack.com/modules.php?op=modload&name=Comics&file=index&action=comic&id=461>out of control.</a> The question on everyone’s mind (and by everyone I mean geeks, I can’t speak for non-geeks but the question on their minds is probably “who is going to win sports?” or “can you believe current events happened?”) is “will Episode III be able to live up to the hype?” I for one think it will. The Star Wars fanbase has grown up and it sounds like Lucas has made a more grownup movie. I guess we will see how good it is Thursday. Our podcast Thursday night will be devoted to Episode III and contain major spoilers so don’t listen to it until you see the movie, or if you don’t care. END_OF_DOCUMENT_TOKEN_TO_BE_REPLACED
It’s no <a href=https://www.bitsmack.com/modules.php?op=modload&name=Comics&file=index&action=comic&id=339>surprise</a> that there is a comic today. I know Rogue Squadron III is a couple weeks away from being released but I can’t help poking fun at it because it bothers me so much. Everyone claims this game is something new but it’s based on the most overplayed franchise in video game history. The day will come when Star Wars games will add the year to the end of their title like sports games. Teenagers who weren’t even alive when Phantom Menace came out will have the following conversation: “Hey, did you hear Star Wars 2006 is out?” “No way man! I haven’t finished the Death Star trench battle on Star Wars 2005 yet.” “Well I heard the Death Star trench battle on 2006 is much better.” I am a Star Wars fan, but I’d rather play something with a new storyline, like KOTOR. At least then I wouldn’t have to shoot those darn AT-ATs anymore. END_OF_DOCUMENT_TOKEN_TO_BE_REPLACED
Star Wars KOTOR is fun enough to do <a href=https://www.bitsmack.com/modules.php?op=modload&name=Comics&file=index&action=comic&id=311>another comic</a> about it. END_OF_DOCUMENT_TOKEN_TO_BE_REPLACED
<a href=https://www.bitsmack.com/modules.php?op=modload&name=Comics&file=index&action=comic&id=308>Today’s comic</a> takes place 4000 years before Episode 1. For those of you that have your finger far from the pulse of the gaming community, Star Wars: Knights of the Old Republic was released this week. Thanks to Bioware, the XBOX finally has a great RPG, the fact that it is Star Wars is just bonus. My full review will come later after the initial wonderment has worn off. So far though the game is really fun. END_OF_DOCUMENT_TOKEN_TO_BE_REPLACED