Skip to content
This will be the <a href=https://www.bitsmack.com/modules.php?op=modload&name=Comics&file=index&action=comic&id=424>last comic</a> for awhile. But before you start torching my house let me explain why. In the spring of 2002 I had just got out of a serious relationship and I needed something to fill that void in my life. I started Bitsmack as a video game review site and worked on writing code from the time I got home from work till the time I went to bed. That summer K-Dog moved in with me and I had an unending supply of material to do my own comic strip. Since I couldn’t draw I wrote the jokes and drew boxes for characters thinking that I would draw real characters later. The talking boxes were kind of funny so I kept with that for awhile until it slowly evolved into what you have seen recently. K-Dog moved out once school started and because of classes I started doing a new comic three days a week instead of five. I graduated in December of 2002 and moved to Columbus. I was still living alone and hanging out with a new group of friends. Then March of this year I bought a house and the comic was starting to feel like more of a chore then something I looked forward to doing. Two of my friends moved in shortly after. I cut the comic down to two days a week but it just wasn’t as fun anymore. Right now I have a great circle of friends and we’re always going out to movies or bowling or shopping or something. I don’t want to be stuck at my computer two nights a week anymore. So where do we go from here? The site Bitsmack will go on unchanged as a video game review site and our personal blog. I’m still going to do comics for <a href=http://www.classicgamer.com/>Classic Gamer Magazine</a> so the comic isn’t completely dead. I still get ideas for comics and I want to bring it back someday. I just need an extended vacation so I can get out and enjoy life. I thank you all for your support and I hope you’ll keep visiting the site until the comic comes back. Thanks! 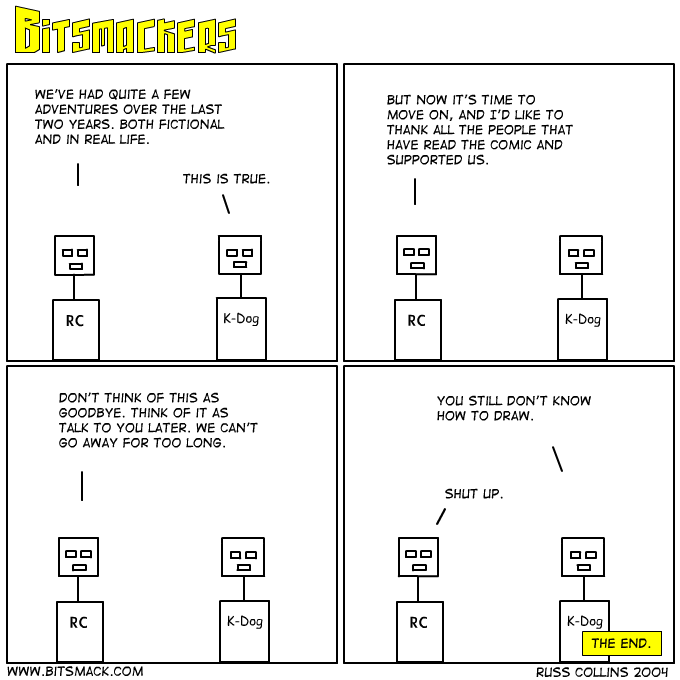